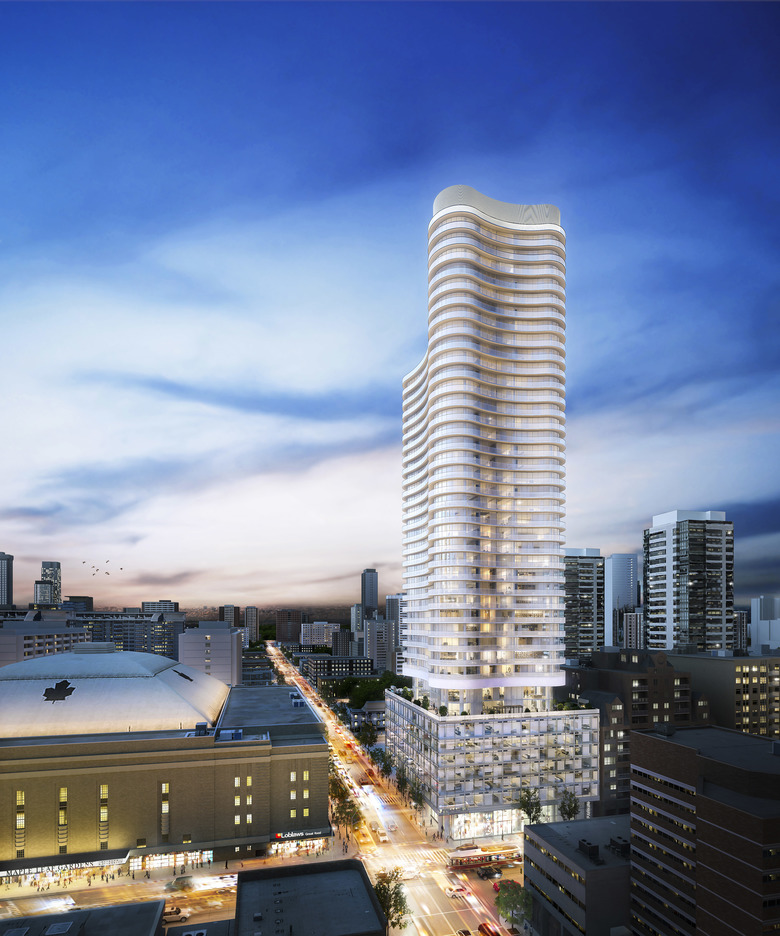 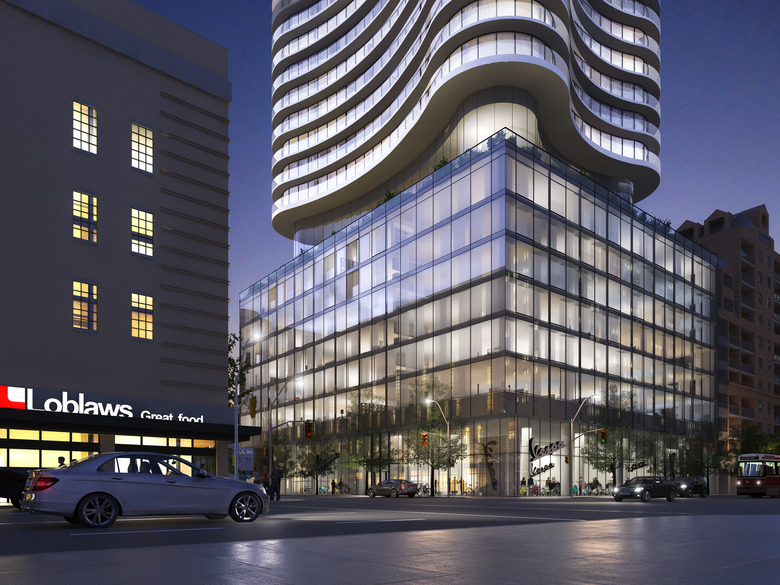 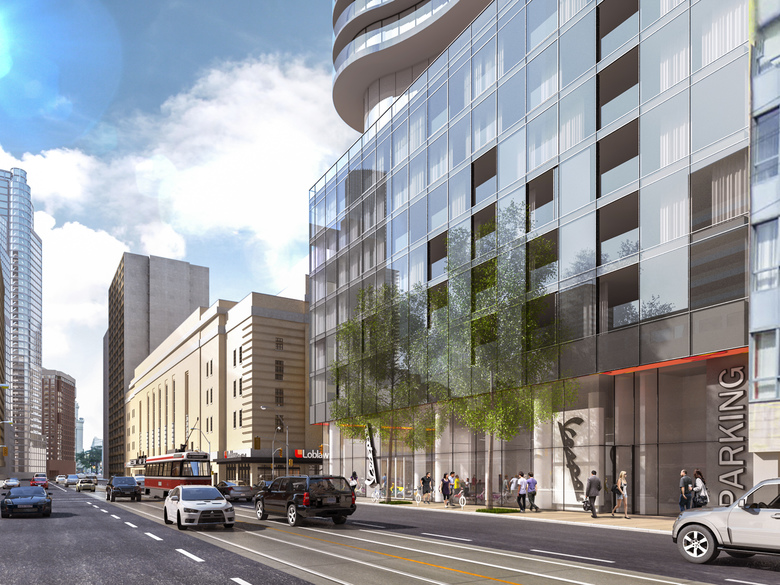 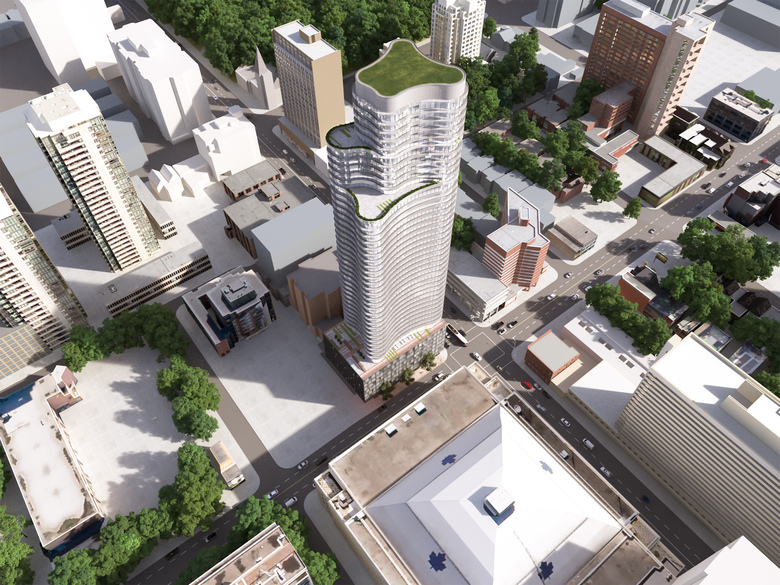 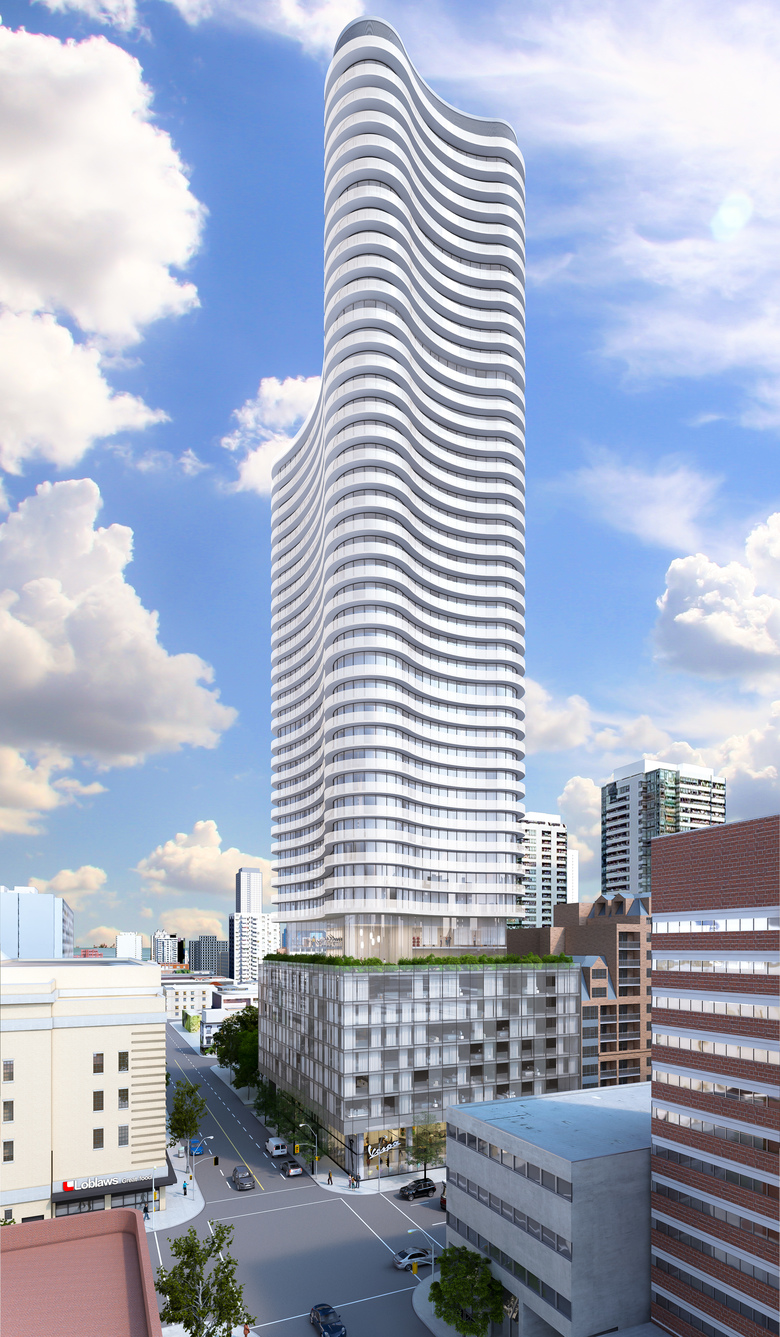 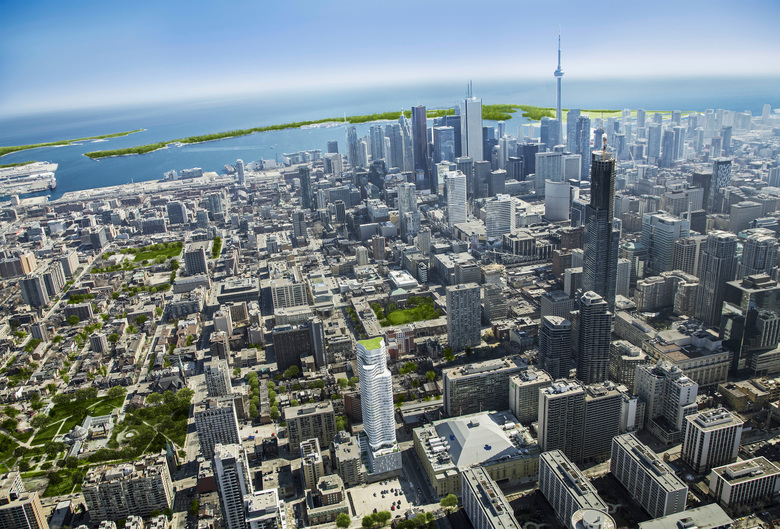 The intersection of Carlton Street and Church Street is hallowed ground for sports fans. Yet ironically this iconic status never precipitated any inflection of the city’s urban morphology. Hockey fans and concert goers spilled out of Maple Leaf Gardens onto narrow sidewalks. With neither a public square nor grand facade, this area typified Toronto’s matter of fact commercialism. Now, the proposal to build a mixed-use retail and residential building on the northeast corner of the intersection offers the opportunity to finally achieve landmark recognition for this historically important area of the city. 70-72 Carlton Street will be a unique 45-storey tower, its slender curvilinear tower and stepped top profile visible for miles. At its base, the new building will offer generous sidewalks by increasing the setbacks from property lines on the public streets.

The sleek glassy base will offer big light-filled facades on the street, with a crisp cornice line at the seventh storey, recognizing and at the same time contrasting with the historic arena’s introverted opaque brick box that gave no quarter. Finally, the area’s grim matter of fact urbanism will be brightened by a modern exquisitely detailed architectural presence. The premium quality glazing system used in the base will feature seamless butt jointed glass forming a glistening smooth surface. The glass surface has been further accentuated by avoiding typical balcony projections common to residential units. Instead of balconies, the base of the project has large glass doors that slide open so that the ends of all of the units have access to the outdoors.

Above the base, the tower is composed of curved surfaces that undulate in and out of the setback. Undulating surfaces include both the glass wall of the units as well as balcony guards at the edge of the concrete slabs.

The tower and base of the building are separated by a two-storey reveal. Dramatically inset from the perimeter of the tower, this reveal has been designed so that the tower appears to float above the base. Inside this single storey space, there is an amenity facility offering residents a series of spaces as well as access to outdoor decks on the roof of the base. The proposed new building at 70-72 Carlton Street offers a generous ground level urban environment, well-considered retail and residential spaces and dramatic architectural presence. The unique curvilinear tower will be a landmark appropriate to the importance of its corner site. It is a fitting neighbor to the former Maple Leaf Gardens arena and a harbinger of the rebirth of this centrally located area of Toronto.