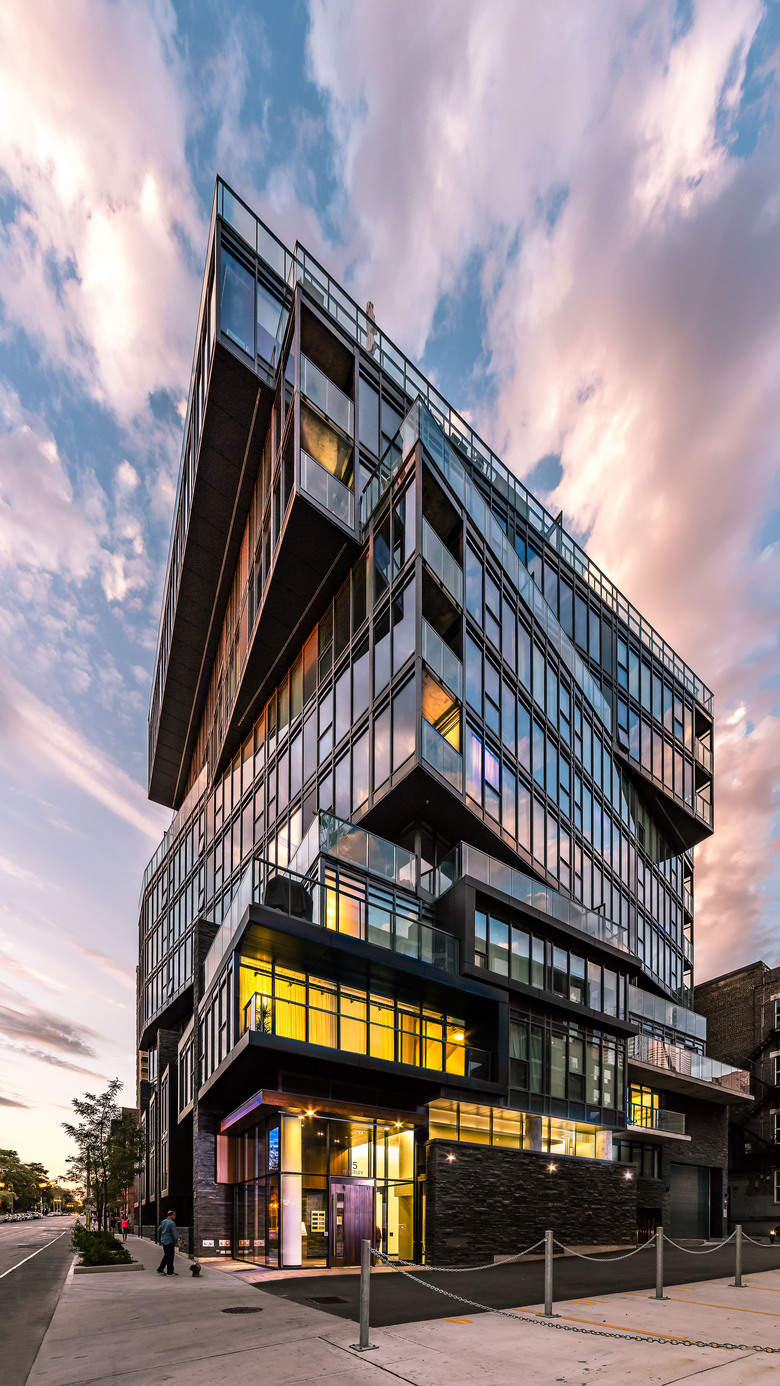 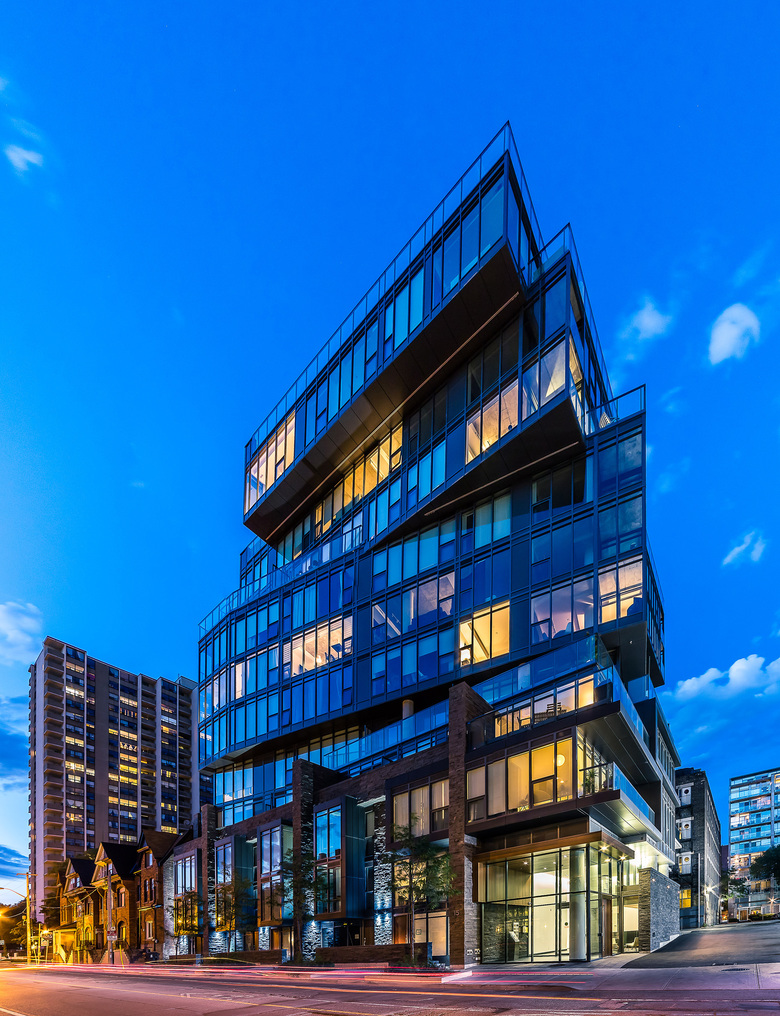 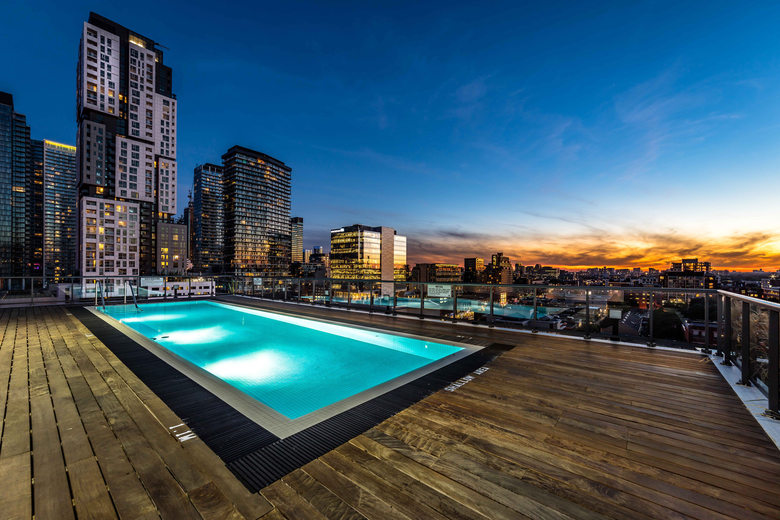 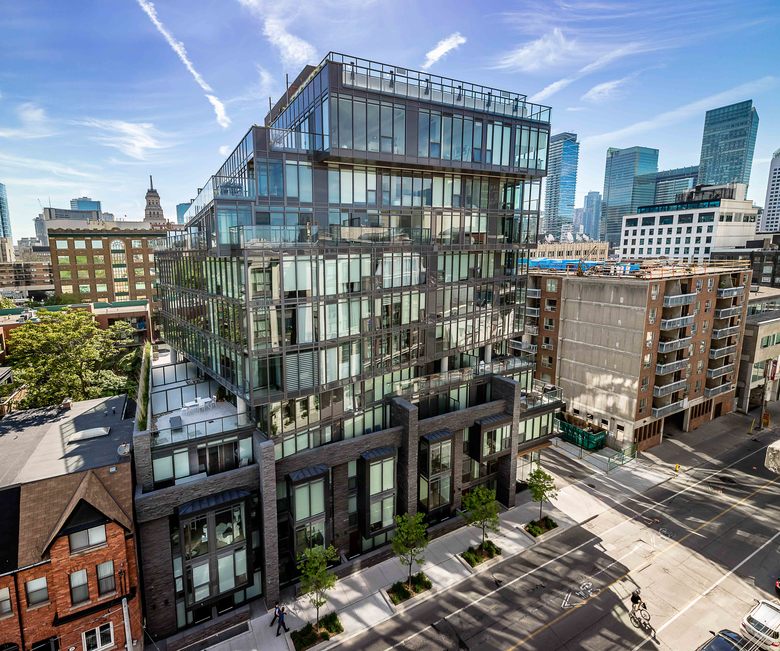 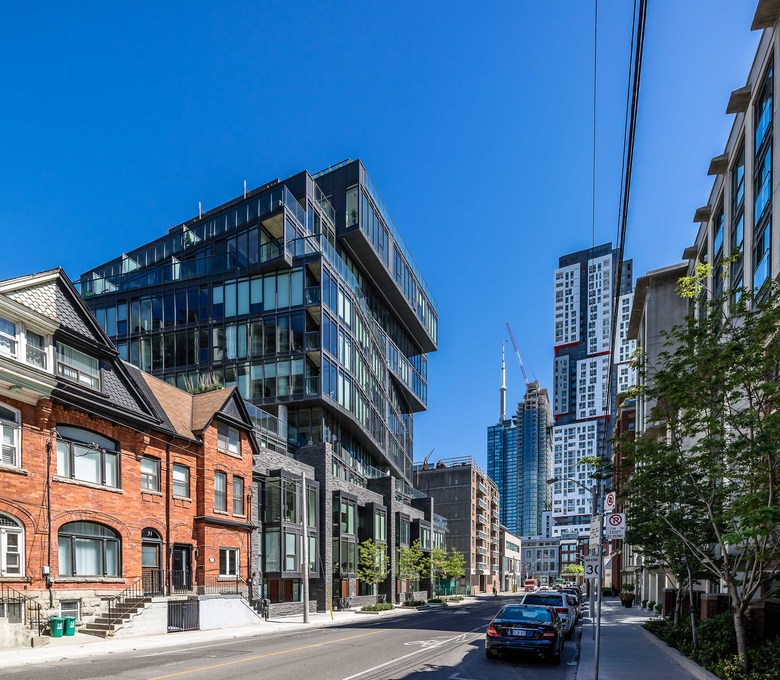 12 degrees was designed as an urban infill project, fitting into the context of a mixed use residential area where the city block has buildings that include both the Art Gallery of Ontario and the Ontario College of Art and Design.

Given the artistic nature of the city block, the design became a playful exercise in massing and an anchor to the south-west corner of the block. The design can be read as analogous to the stacking of toy blocks, with one of the blocks skewed at 12 degrees from the others.

Built on a compact thirty-six metre front by thirty-one metre deep urban site on Beverley Street, 12 Degrees consists of a three-storey glass and ledgerock-clad base under a rotated glass-clad mid-section; all topped by a cantilevered glass penthouse.

The building mass has been broken into a base and a tower. The base of the building is three stories high and is composed of townhouse style units that relate to the existing adjacent Victorian homes. The townhouses repeat themselves in a series of glazed window bays and stone clad piers, that make reference to the Victorian roof peaks and projecting bays. The base opens up at the corner to expose the glazed main entrance and lobby, there is a hovering canopy of wood that signifies that this is the public part of the building.

The tower is fully glazed above the base and is composed of three parts that playfully shift back and forth from the building orthogonal grid, there is one portion three floors high that is skewed 12 degrees. The skewed portion twists away from the corner above the main entry, helping to lighten up the building massing in that area.

In addition to its distinctive architectural appearance, 12 Degrees is noteworthy for its carefully considered urban design. The two-storey street-accessed townhouse-style units at the base of 12 Degrees share in common masonry cladding, projecting bay detailing and height with adjacent Victorian homes and row houses lining Beverley Street. The rhythm, height and masonry materials of the adjacent Victorian townhouses were respected by our podium design. The brick warehouse to the rear inspired the design of the laneway side of our building; a typical feature of many Toronto neighbourhoods.

We also used the stepping nature of the building massing to reduce the impact of the building on the neighbourhood, shadowing was reduced and the building transitions down in height from eleven floors to three floors adjacent to the existing houses. The main entry and elevator lobby for the tower, marked by a hovering wood canopy, is located at the southwest corner of the building, closest to the vibrant commercial activity at the intersection of Beverley Street and Queen Street West. Further away from bustling Queen Street, individual entrances to the townhouses are located behind low garden walls, affording privacy and a series of small terrace gardens.

In addition to the six, two-storey townhomes along Beverley, 12 Degrees will include eighty-five units, ranging from four hundred and fifty-square-foot studios to seventeen hundred-square-foot suites, thirty-one of them will be two bedroom units and nine suites will have three bedrooms.

The upper levels of the building are arranged to provide for approximately ten units per floor, many featuring balconies afforded by the skewing massing. The top of the thirty-two meter high building has two penthouses; one featuring a six hundred square foot terrace. The top of the building also has amenities for the entire condominium including a seasonal swimming pool and a large terrace offering unparalleled views of the Toronto skyline.